The Auto Hail Repair Industry uses many terms and has even coined a few. Learn some of the actual language used by the technicians in the hail repair field. Note: Feel free to link your website to this page, but do not copy any of the information. As with the entire site, it is copy-write protected. 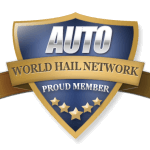 Access – refers to being able to actually get to a dent for repair.

Adjuster / Adjustor – a person who specializing in estimating hail damage.

Aluminum – refers to the type of metal that the car panel is made with.

A-Pillar – The post that runs down along the sides of the windshield in front of the front doors.

Appliqués – The vertical area between the doors (usually Black).

Auto Hail Damage – Any damage that is caused by storms which drop hail stones.

Auto Hail Repair – The process of repairing or replacing any materials damaged by a hail storm.

Base Coat – The color layer of the painting process.

Belt Molding – The trim at the base of the window glass.

Blehm – A manufacturer of quality dent repair tools. Original owner of A-1 Tools.

Body Filler / Bondo – The putty like substance that body shops use to fill in dents.

Body Line – The bend in the metal panel for added strength and/or appearance on a vehicle.

B-Pillar – The support posts between the front and rear car doors.

Brace – Reinforcement behind the panel to add strength and rigidity.

Brace Tool – A specially designed tool to slide between a brace & the panel skin for removing dents.

Cherry Picker – Nickname for a technician that grabs the easier to repair vehicles when working wholesale deals with other technicians around.

Claim – A demand for payment (or sum of money) in accordance with an insurance policy.

Claimant – The person that is covered by the insurance policy.

Clear-Coat – The top layer of paint that is applied to cover and protect the base coat.

Corrosion – The act of metal rusting.

C-Pillar – The support post that runs along the sides of the rear windshield.

Cracked Paint (Ouch! – Hard for a dent guy to even type) – Paint is brittle and can crack either from the impact or from too much force during a repair.

Cross-checking – The act of looking at the dent from various angles to ensure a complete repair.

Deck-lid – The car part that covers the vehicle’s trunk. Also known as a boot in some countries.

Deductible – The amount or portion that a claimant is responsible for paying when dealing with insurance repairs.

Dent – When metal is bent out of shape, the depression is known as a dent.

Dent Light – The special light used by a technician to magnify the dent and read the reflections in order to make a repair.

Dent Repair – The act of reshaping or filling the metal to bring the dented area to pre-damaged condition.

Dent Wizard – One of the largest and oldest paintless dent repair companies.

Ding – A term used to describe a small dent.

Double Brokered – When there are two middle men between the work and the tech taking a percentage.

Double Panel – When a vehicle panel is more than normal bracing and over 50% inaccessible it is known as double paneled.

Drill / Drilling – The act of creating a hole used for access.

Drip Molding – The long moldings that run along side the rail on the edge of the roof.

Estimate / Quote – When the dents are counted up and priced and the R & I and other expenses are added up, this paper is called an estimate.

Estimator – The person who evaluates the damage and writes the estimate. (Also known as an adjuster)

Fade – Refers to the workable area of a dent lights reflection.

Fender – The vehicle part that covers the front tires. (Next to the hood) Also known as a guard in some countries.

Fender Liner – The plastic cover around the tire opening the protects the underneath side of the fender panel.

Flat Spot – An area of the paint lacking orange peel, usually after wet-sanding.

Glass / Like Glass / Glass it out – A term used by many dent technicians for extremely good repairs.

Glue Pull – The method of pulling a dent rather than pushing it from the backside of the panel.

Glue Tabs – The plastic piece that is glue to the vehicle used to pull a dent out.

Hail – An ice formation created when water droplets freeze and are carried by updrafts where another layer of ice is formed.

Hail Stone – The actual ice ball that falls to the ground.

Hail Storm – A storm either carrying or dropping hail.

Hail Dent – The impression left in the metal from the hail stone’ impact.

Hail Strike – When a hail storm hits an area, it is referred to as a strike. Also a company specializing in hail maps to track and find hail damage.

Headliner – The interior panel above the passengers below the roof of the vehicle.

High Spot – When the metal is pushed past level, it is known as a high or a high spot.

Hi-Tech – A large hail catastrophe broker based in Chicago. Known in the industry as ‘The Russians’

Hood – The panel that covers the engine compartment in the front of the vehicle. Also known as a bonnet in some countries.

Hood Stand – A device designed to place hoods and deck lids on to make repairs easier.

Invoice – The receipt for a completed repair.

Insulator Pad – Heat resistant cover under the hood or deck-lid.

Kick the panel – PDR slang for letting the body shop repair the panel. “Kick the hood”

Laminated Glass / Laminated Window / Double Paneled Glass – Windows that have two thin panes of glass instead of one thick one.

Light Board / Reflection Board – A small panel used for PDR to show highs, lows and imperfections.

Low Spot – An area of a dent that is not brought up to level.

Micro-Fracture – Paint cracks that are not visible to the naked eye.

Mini-Lifter – A device used to pry up glue tabs to remove dents.

Mobile Tech Shade™ – A state-of-the-art umbrella used to shade not only the work area, but the technician as well.

Moldings – Decorative trim that aids in drainage and aero-dynamics

Mound / Mounded – When a dent is evenly pushed or pulled past level.

NAPDRT / National Alliance of PDR Technicians – A group of technicians working for the betterment of the PDR industry.

Oil Can – When the metal is so stretched that it cannot be put back into place.

Open-Area – An area of a car panel that is not double paneled or braced.

Orange Peel – Paint is not smooth but bumpy like the peel of an orange if you get a close look under proper lighting.

Oversized Vehicle – This refers not only to actual size of the vehicle but also extreme heights.

PARS – A large hail broker based in Colorado.

PDR Linx – A large hail broker based in Texas.

Pitted – When a dent is almost completely removed except for a tiny area it is known as pitted.

Plugs – Plastic discs used to seal up a hole.

P.O. / Purchase Order – The number on a document used to approve, track and process purchased items and services.

Primer – The first layer of paint used to seal the body filler before the base coat is applied.

Pulled Paint – When glue pulling a dent, sometimes the paint stays on the tab instead of the car.

Pull it – Lingo used to refer to glue pulling versus pushing a dent.

Push-to-paint / P2P / PTP – The use of removing the dents with PDR yet still requiring refinishing.

Quarter / Quarter Panel / QTR – The vehicle panel that covers the rear tire. Next to the deck-lid.

Rail – The thin panel above the doors that connects to the roof.

Reflector board – Instead of using lights outdoors, many door ding technicians use this to see a reflection for fixing dents.

R & I / Remove & Install / De-trim – This is the actual process of removing an undamaged part for creating access.

River / Valley / Railroad Tracks – The line that is left running through a repaired dent when it is removed without cross-checking.

R.O. # / Repair Order Number – The reference number assigned to a vehicle by a body shop, dealership or other fleet operation to track vehicle repairs.

Rod – A long metal tool used to push dents out with the use of leverage.

R and R / Remove & Replace – This is the actual process of removing a damaged part and replacing it with an undamaged one.

Sail / Sail Panel – The triangular panel behind and above the rear door that runs along the rear windshield. The sail connects the rail to the Qtr panel.

Upper Sash or Scalp Molding – The molding that runs along the top of the window on a door.

Shadow – Just like your own shadow, but this one shows where the high spots are during a dent repair.

Slide Hammer – A weighted device used to pull dents either with glue pulling or conventional repairs.

Smoked – Referring to a panel or vehicle with severe amounts of damage. Almost not repairable using PDR.

Standards – Common mark-ups and practices used in the PDR industry

Stretched – When the dent reaches a certain depth, the metal is pulled which may result in oil canning.

Sunroof – The glass window in the roof of the vehicle that retracts.

Sunroof Assembly – The glass and entire track that it moves in.

Supplement – The dollar amount requested above the originally estimated amount.

Taco / Folding – The questionable method for removing a headliner without taking down all the pillar trims.

Tag-Team / Splitting cars – When two or more technicians work together on the same vehicle while repairing hail damage.

Technician – Person performing the repairs. Known as a tech for short.

Tech Sheet – Either paper or digital spreadsheet used to track the vehicles that a technician repairs.

Ticket – Total retail price of a repair. Often referenced by a percentage. (80% of the ticket)

Tool / Dent Tool – Any device or rod used to remove a dent.

Typical Dent Guy – When spotted in their natural surroundings they are usually seen wearing flip-flops, camo shorts and an affliction shirt. 🙂

Window Guard – Lexan, steel or plastic sheet used to protect the glass window on the doors.

Winter Work – Dents that may be repairable, but would take too much time and cost to much money to be worth fixing during busy season.

Note: Feel free to link your website to this page, but do not copy any of the information. As with the entire site, it is copy-write protected.

Auto Hail Repair is always evolving and so is the terminology.

If you need a word defined or know of an auto hail repair term that we should add, simply leave a note in the comment section below.