A Blending Hammer is a tool used in the paintless dent repair process. There are two schools of thought on blending dents. First there is what many refer to as feathering or spreading a dent out so the eye doesn’t catch it anymore. This is not the preferred method of blending. The other, truer method of blending dents refers to actually removing the dent or at least removing all of the pressure holding the metal in a dented position. Think of how you would push on a outer edges of dented beer car to pop the dent out. This works because the pressure holding the metal down is lessened or removed. When there is no more pressure (can be hidden on smaller dents) the dent will come out or it will be very easily glue pulled. Blending hammers and tips are necessary tools for either style of blending. 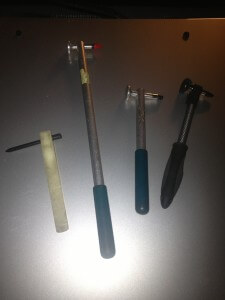 There are many manufacturers and designs of blending hammers. Most are made from very lightweight materials to allow the technician to have more control as well as more precision movements of the metal. Newer models are utilizing carbon fiber handles versus the older aluminum or wooden handles. Some of the hammers use steel heads that are polished like mirrors. Dentcraft carries various length blending hammers that are all aluminum and have interchangeable screw on tips to allow each technician to put together the exact configuration that they prefer.

The PDR blending hammer has a short history.

Although blending hammers have not been widely used for a long time, they have come a long way. They basically got their start when technicians needed to get further back from the dent to fine tune the high spots. They started making very crude devices to help achieve this. Some would mount their knock-down to a board and others would polish jewelers hammers or other light hammers that they found. There is debate over who actually started using the blending method. German dent repair technicians are said to have come up with the technique of blending the rails whereas many Italian technician use the blending hammer on all of the panels.

There are many great companies making blending hammers now. The feel that you are looking for is the major factor to consider. Interchangeable tips are a very nice feature to have as you can experiment and get the exact impact and striking point that you are searching for. Most technicians like the way that a polished metal tip moves the metal. Others prefer a plastic tip that does not need to be polished as often and has less of a tendency to leave marks in the paint. A big misconception is that lighter is better. We feel that the handle should be super light to make it easy to swing, but the head should have sufficient weight to deliver a solid enough blow to move the metal and get the desired results. If the head of the hammer is too light, you are forced to use your muscles more and that makes it more difficult to deliver accurate hits with consistency. There are many great hammers that we recommend for PDR blending including the Jackhammer (also known as the Shane Jacks Blending Hammer) and the Druz Hammer made by Drew Lechtenberg. Almost any large pdr tool company makes a blending hammer or several now. Many great deals on blending hammers can be found at EdgyTools – Shop for Blending Hammer Deals.

When a technician glue pulls a rail, every dent needs to come out completely or you end up with waves. Blending hammers are perfect for fixing this wavy look in a rail since the dent technician can work further away from the dents thus changing the angle of reflection. This allows for repaired rails that are as straight as a dent rod.

When using a blending hammer, it is much like using a regular knock-down in that you are recreating or matching the texture of the paint known as orange peel. Finishing the dent to the original shape without disturbing the paint texture is the key to any great PDR repair and a blending hammer can help achieve these high level results.

Read about the next term: Base Coat – The color layer of the painting process.