Tool / Dent Tool – Any device or rod used to remove a dent. (Scroll down to bottom of page to read more) 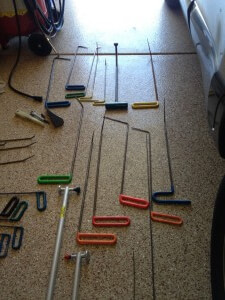 Dent Tools or PDR Tools are basically anything that can be used to remove a dent from a vehicle. The most common types are long steel rods with different bends to apply pressure to the back of the dent using leverage. Brace tools and whale tails utilize a twisting motion to gain the leverage. Glue pulling is a method of pulling the dent out instead of pushing it. No matter what kind of dent tool you are looking for, you can find it from one or more of our vendors below. If not, please reach out to us and we will work hard to find it.

Manufacturers of PDR Tools can be found all over the web, but the WHN keeps up on the industries best suppliers and producers of dent tools. Many of the dent tool companies sell everything needed to perform quality paintless dent removal. Some other’s only sell a couple of dent tools that they have created. Either way, you can find it here on the World Hail Network.

Of course, other PDR Tools are available, but these are the companies that we use and trust.

Tool Vendors, if you would like to be added to the list, please contact the World Hail Network. To activate your links and pages like the other companies, please check out our B2B options or contact us. We often will trade our time for your help or for pdr tools or services.

Find a repair company in your area now.