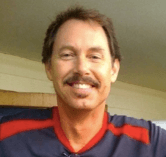 Robert has worked in over a dozen different countries and works with most of the world leaders in hail damage repair. Robert uses a process called paintless dent repair and has been providing his services almost since the process was discovered.